Meet Lance,  a guy who’s had a life-long ambition to be a rally driver. Several months ago he decided it was time to turn his dreams into reality.
Not sure where to start, Lance knew he needed some help. Through Facebook he found us and got in touch.

Initially the idea was to buy a second hand rally car and get going. After we sat down and asked some questions, we decided that the best option was to build a car. In Lance’s case it was his 1.9m (6’4”) frame which gave us a special set of conditions and tipped the scales to build instead of buy. The last thing he needed was a car he couldn’t fit into or drive comfortably.  (Details of the car build are here)
Whilst the car took shape, there were plenty of other items to take care of. A club membership, rally driver’s license and sorting some safety gear (helmet etc) were top of the list. Lance also needed a co-driver, and some education on how a rally works. Where we could find an hour here and there in Lance’s busy schedule we tackled each item one by one.
In the lead up to his debut event, Lance spent time at our venue behind the wheel learning his new forest racer. We spent our time in the co-driver’s seat providing tuition and tips.

With the theory covered and some solid practice and testing under his belt, everything was falling into place for the Clubman Cup Darling 200 Rally.

The day of the rally dawned and we set up ready for the start. 39 cars had entered and seven of those were from our team. Lance soon arrived and he and co-driver Jace went 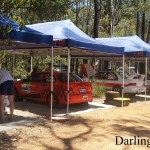 through their check list, adjusted race harnesses, tested their intercom and generally prepared. Soon enough the start time ticked over and Lance started his first rally.
When the guys came in for their mid-point service, both were beaming from ear to ear! Were they having a ball? You Bet! We checked and refuelled the car, the guys had a bite to eat and a drink and they were back out to tackle more forest roads.

So how did they go? On most stages the guys were setting times inside the top ten! On the fourth stage of eight they got the car stuck on a mound of loose dirt for a few minutes. They continued on unabated and finished the rally having a blast the whole way. 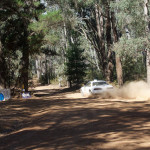 Without the delay on stage four, they’d have finished the rally in eighth place, a brilliant result for their first event. The results however were a bonus, it was all about the fun and they had that in spades!

After the rally Lance posted  “I finally got to realise my lifelong dream last week entering and finishing my first competitive Rally at the Darling 200. Thanks to Rally Action for building an awesome car from the ground up and all the help to get me into the sport!”